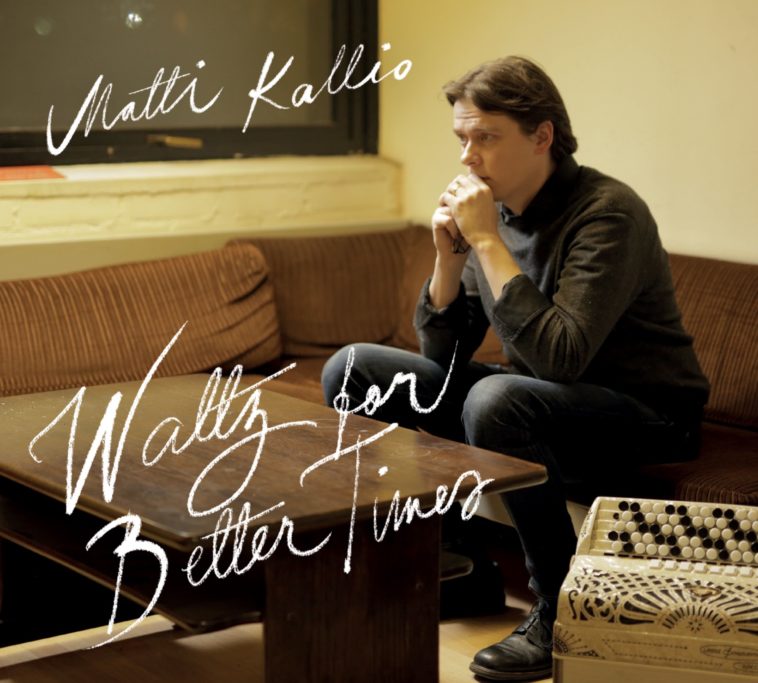 The Iceland-based Finnish multi-instrumentalist Matti Kallio is a prominent multi-talent within the music scene. He has contributed to over a hundred records, collaborated with artists such as Värttinä, Björk and Hector, and won awards for his work with music for children and for the theatre. With his first solo album Waltz for Better Times, which will be released in March, Kallio explores a new dimension to his rich artist career.

Waltz for Better Times presents new folk music in its diverse variations for friends of accordion and acoustic music. Kallio’s own style of playing, which springs from Nordic and Celtic-Anglo Saxon tradition, and jazz influences, has a prominent role in the musical atmosphere of the record. The tracks are composed by Kallio himself, who can be heard playing the accordion. He is joined on the album by Petri Hakala on string instruments, and Hannu Rantanen on double bass – both of whom also perform solos on the album. In addition to this acoustic trio, the album also features accordion artist Maria Kalaniemi.

“The idea of making a solo album had been brewing in my mind for a long time, taking shape in my subconscious. I think now was the right time for me as a musician to make the album, I was ready for it. Playing the accordion has been part of my life since childhood. I have contributed to over a hundred albums during my career, sometimes as a producer, other times as a musician. While making the solo album, it was amazing to experience that this time I’m responsible only to myself. When a trio ensemble is at its best, it’s more than just the sum of its parts – there is something fascinating in that. I am also grateful to Maria Kalaniemi for her guest appearance on the album. One of my long-time dreams has been to record a song with her as an accordion duo!”, Kallio says regarding the making of the album.

The record release concert will take place at the Sampo Soikoon! club in Helsinki on Saturday the 21st of April at 19.00. The album is available from the 13th of March online at www.mattikallio.bandcamp.com. In Helsinki, the record is also sold at Digelius and by The Finnish Folk Music Association. The trio will be doing a week-long record release tour on Iceland at the end of May.

Ask link to the online album for the review!