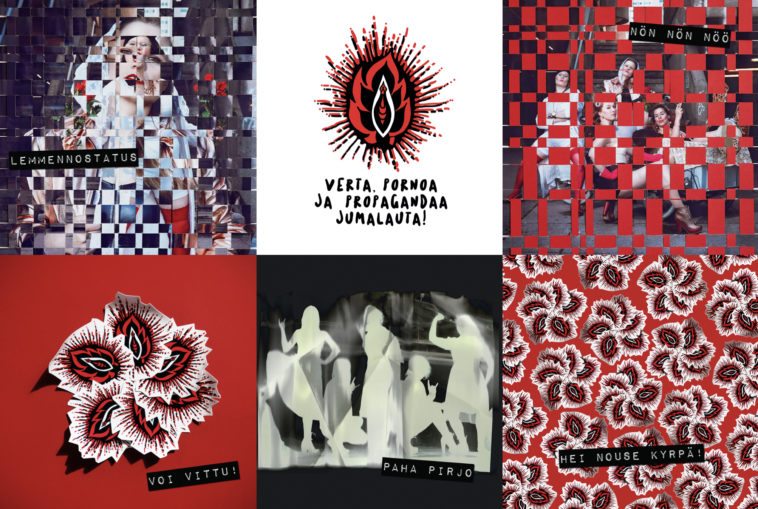 – concert serie says goodbye with an EP and a music video

The EP of the group VPPJ is called Verta, pornoa ja propagandaa, JUMALAUTA! (Finnish for Blood, porn and propagnda, GODDAMMIT!) and it consists of seven songs, at least one from each part of the four-concerts combo. The songs were recorded in spring 2020. The first part of the EP comes out October 7th and the second part 4th November on Bandcamp. On 26th of November comes out the Love spell – Lemmennostatus music video on Youtube. It is filmed and directed by Alisa Javits and choreographed by Sini Siipola, who also performs on the video. On that date the songs will be published also in Spotify.

The cover art is designed by photographer and graphic artist Kira Leskinen. Every song has a own unique cover and the pictures play with the promotional photos of the concert serie and the logo of a flaming pussy designed by Paula Susitaival. Leskinen has followed the project near and also took the photos for the Propaganda-concert.

The group wants to thank the audience, the concert venues, festivals, funders, cooperation partners and media. The group wishes that feminist work will not be forgotten and will keep on living in the folk music scene as well as the whole society.

The music available in  www.vppj.bandcamp.com

The traditional love spells seemed to influence the self-esteem most of all!

The folk tales of devils are often quite amusing. The story of this evil lady Pirjo is found in numerous variations around the world but there is only one story collected in Finland by A. I. Arwidsson somewhere before year 1837.

This joyful traditional tune is born out of the funny idea that even women could fight each other with fists and blood running from their noses… Were women more free to sing of things they were not allowed to do or talk of?

Internet is a treasure box for propaganda nowadays. An internet article of the concert serie by the Finnish Broadcasting Company YLE was commented vividly by anonymous people. We took the best bits and turned their hate speech into a song. We want to thank especially the alias Nön nön nöö who inspired the entire chorus of the song!

”Let the little traveller out, the tiny-fingered into the world.”
The spell for giving birth is loaded with the most powerful words of all.

Voi vittu! -kimara  = Oh pussy! -medley (FI-VPJ-2000005) Duration: 4’44
A two-song-medley of the power of the cunt. The traditional lyrics of the Birth of the pussy are collected by the famous Elias Lönnrot (who compiled the Finnish national epic Kalevala) in 1828-1831 in North-Karelia. Rap lyrics and melody are by Amanda Kauranne and VPPJ.

In the old runo-songs the cunt or the pussy is describes as a powerful force of nature, but also as the most lovely and precious thing, which has even been transported as a luxury product from far cities! In the Finnish tradition, the female genitals have been considered to have a lot of power (väki) in them, because the vagina was the portal between two worlds. The power of the pussy was important and it protected the ones close to you. By showing one’s ass or genitals to the bear, one protected the cattle, because even the holy bear would be scared of the female power. One could also break the good luck of others or protect one’s loved ones from harm by showing pussy to them. The cunt, vittu in Finnish, was not a negative thing, but an important and powerful part of the community.

These beautiful lyrics for a spell to lift the cock up to a full erection sound like a very straight-forward love song!

What kind of rituals do you have before going to a party? How can you make your own self-esteem or self-love stronger? The music video uses elements and topics of the entire concert serie.