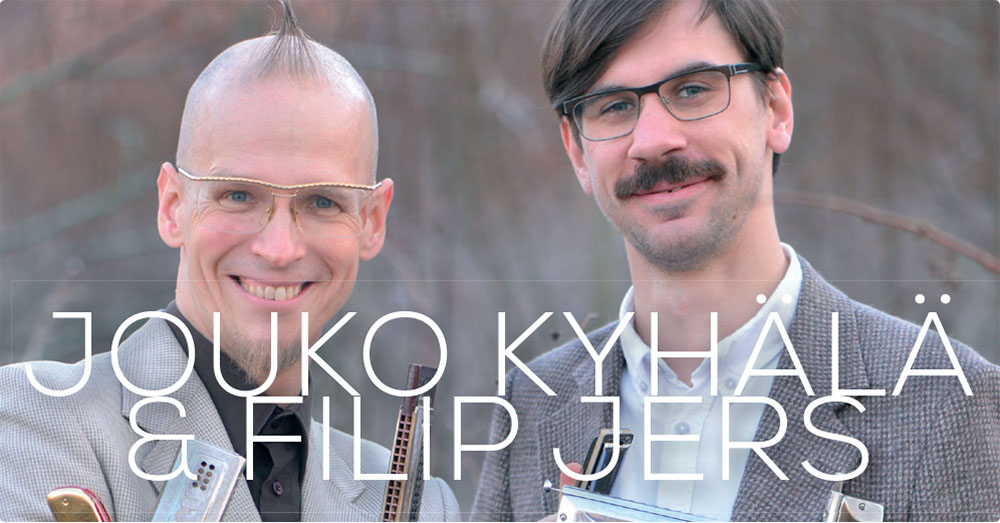 Two of the leading harmonica specialists in Europe, Filip Jers from Sweden and Jouko Kyhälä from Finland have teamed up and formed a Scandinavian power duo. Their duo performs traditional music of their home countries: rhythmic polskas, joyfull polkas, melancholy waltzes, schottisch, menuett and beyond. All played with two harmonicas.

The harmonica is a found in many parts of Sweden and Finland. It has been used by traditional musicians for more than a hundred years. Everyone knows this modest instrument but few really know how it has been played, and even fewer know how to do it.

Filip Jers first heard harmonica played by his father when he was small kid. It made an unforgettable impression, and twenty years later he took his jazz master’s degree from Royal Academy of Music in Stockholm as the first harmonica player ever. Jers is a harmonica player in third generation; also his grand dad played the instrument. Today Filip is the most wanted jazz harmonica player in Sweden. He performs with several combos and visits big bands as a soloist. Jers is also member of the world music band Stockholm Lisboa Project.
Jouko Kyhälä picked harmonica as teenager rock musician. Soon he fell in love with the instrument and started studies of traditional music in Sibelius-Academy Folk Music Department. He was the first harmonica player to get his master’s degree from Sibelius-Academy. A decade later he became the first Doctor of Arts with harmonica in Finland, maybe in Europe. Kyhälä is the leader of the internationally known harmonica quartet Sväng, and also plays in several other bands and performs as a soloist. In October 2013 these master musicians sat down in Jouko’s countryside studio at Kirkkonummi and recorded their first cd Breathing fresh Scandinavian air into the harmonica “New Scandinavian Harmonica Vol. 1”.