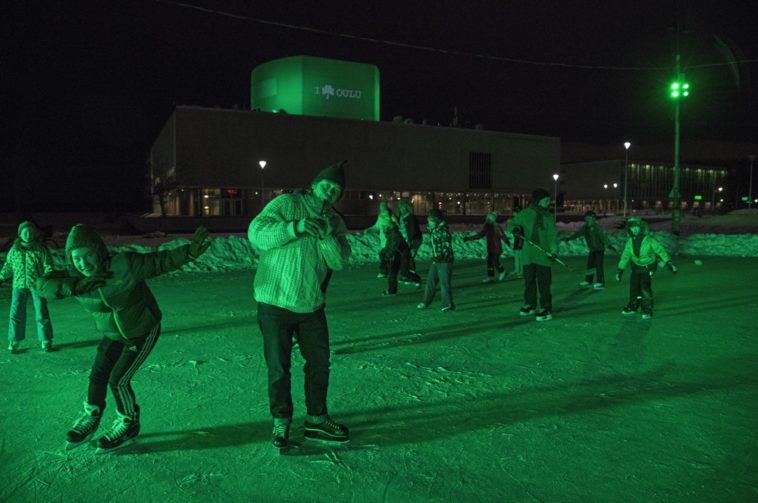 Oulu, the Irish Culture Mecca of Finland, joins the Global Greening campaign with The Ice Rink and the Oulu Theatre in the city’s historic harbour area.

On March 17th, the world goes green to celebrate St. Patrick’s Day with iconic buildings and sites across the globe taking part in Tourism Ireland’s Global Greening Initiative. Further afield, iconic sites that have also gone green include the Colosseum in Rome, the Sacré-Cœur Basilica in Paris, The Sydney Opera House and the London Eye

Oulu is considered the Irish culture mecca of Finland due to the success of The Irish Festival of Oulu, which takes place in October every year and has been running since 2006.  This year’s festival will take place from the 3rd to 7th of October but Oulu’s active Irish music and dance happenings ensure that the city is ‘green’ all year round. The city council recognises this and it is no surprise that the strong Irish cultural traditions and music that are well and truly alive in the city are adding great strength to Oulu’s bid to become European Capital of Culture 2026.

The Greening was organised by Brent Cassidy, Gaeilgeoir, musician and founder/Director of The Irish Festival of Oulu in cooperation with LUMO Light Festival Oulu and the Oulu Theatre.

Cassidy says, “The aim of our Greening is to celebrate the spirit of St. Patrick’s Day by illuminating popular Finnish and Irish cultural pastimes. The Greening took place in the historic city harbour area ice rink with the iconic Oulu theatre’s “hat” lit up in the background. In our Greening, Markus Lampela, the pioneer of Irish music in Oulu, leads skaters of all ages while playing the tin whistle. This image represents the vibrant Irish music culture in Oulu married with the traditional Finnish past time of ice-skating.”

The Irish Festival of Oulu is considered the premier Irish festival in the Nordic countries, attracting nearly 80,000 people since 2006. The unique aspect of the festival is the way it unites people through the celebration of Irish music, dance and culture events. The versatile programme ranges from award winning theatre performances, film, poetry, Irish language classes, music and dance workshops and plenty of world class Irish music including the likes of six time Grammy award winners The Chieftains, Altan, Lúnasa, Dervish and many more top Irish bands and performers.

Tourism Ireland is the organisation responsible for promoting Northern Ireland and the island of Ireland overseas as a leading holiday destination.

On http://media.ireland.com you can find an updated media room with inspirational articles, press releases and link to our photo library

For press enquiries contact Edel Eglington on eeglington@tourismireland.com or + 45 33 17 72 32