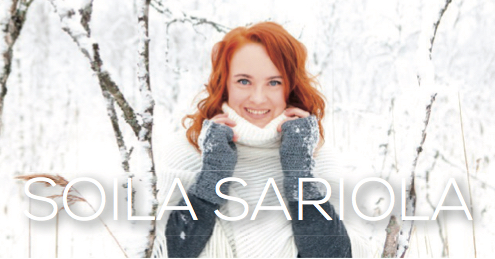 The groundbreaking sound of the music and arts

Multitalented musician Soila Sariola combines elements from old and new in her profession. She

operates with a wide range of vocal and band ensembles. In 2005 she graduated as a Master of Music from Sibelius Academy‘s Folk Music Department, where she continued her studies in the spring of 2011, this time studying to be a Doctor of Arts by exploring improvisation and cross-arts approach.

Sariola works as a full-time alto singer in Rajaton (Boundless) vocal ensemble, which is one of the most well-known and beloved a cappella groups globally. Sariola also performs with a folk influenced band known as the Saaga Ensemble and has been involved with the multi-art and theatre project, The Songs of the moment-Nordic. She has education as hospital musician (2014) and has also be chosen to Cirque du Soleil at the spring 2015.

In addition to her singing, she is well-known from her versatile style of composing. She also writes lyrics and arranges music for the Rajaton, other choirs and for various ensembles (e.g. SATB/SSAA etc.). She is also a congenial pedagogue, giving both individual lessons and workshops, and also constantly teaching ensemble – and improvisation courses both in Finland and abroad. Sariola is always searching for new paths and educates herself in diverse means in various fields of performing arts.

Beside Finland she works constantly through out the world; f.ex. Canada, USA, Asia, Africa and all around the Europe.

“It is important to me to be up to date and live together with the change.”