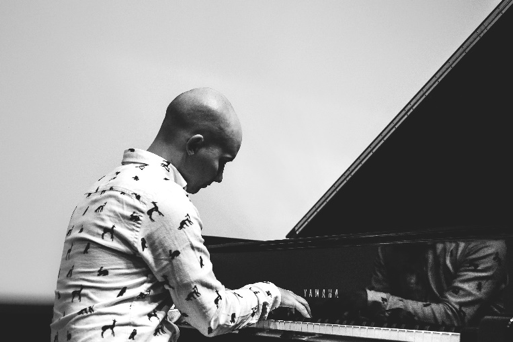 A New Wave of Minimal Music

Project Vainiolla debut album, Animus, was released in autumn 2015, and it has been chosen to the professional classical music event Classical:NEXT. The ReStaged showcase where Project Vainiolla is performing is curated by Steven Walter, an ECHO award winner. The showcase will feature five different musical acts, that differ with their performance context from conservative classical music. Project Vainiolla will show his music video It Flows which is directed by media artist Raimo Uunila.
“Project Vainiolla is like a sandbox; it gives me a lot of room to experiment, be creative and enjoy music. The only limit for my wild creativity is the piano. The limit of the instrument requires me to examine it in a new way. From this I am able to create new sounds and ways to play with new tones. When I’m composing for a symphony orchestra, I jump from the sandbox onto a rollercoaster.”
Kalle Vainio
Music video It Flows

“An expressionless bearded man stands staring in the middle of a shopping mall. Shown in time lapse, we see the man quickly blink, breath, and sway slightly as a repetitive piano melody revolves like a sonic clock. This is the minimal yet provocative first shot of the video for “It Flows”, the opening track for Project Vainiolla’s latest album, Animus. Whatever you may think of minimalism in art or music, one thing can be said of it: it gives us space to have our own unique relationship with the material. It may seem simplistic, even boring on the surface, but if you care to unpack it, you just may find that it’s more profound than having the blanks filled in for you. Animus borrows much from the minimalist tradition of Philip Glass, Steve Reich, John Adams and the like, but it also holds some stylistic surprises, incorporating improvisation, atonality, and even Finnish folk music techniques, all used in an expressionistic way that seems to tell a story.” Matt Ackerman – Howling Caliper Music Blog

Kalle Vainio (b. 1986) is a composer of the new generation whose evocative musical language is a curious fusion of Finnish folk music and minimalism. He has been deeply influenced by progressive music and visual art forms like movies and paintings. Vainio’s elegant and experimental style convincingly integrates these diverse elements into an inimitable individual approach to contemporary Finnish music. Vainio is constantly creating new music and odd avant-garde projects like upcoming “Project Vainiolla On the Road” where he travels through the countryside of Finland with an upright piano playing and performing.

Ethnogala's programme is updated. New names in the program are singer Amanda Kauranne who will open the evening, Jouko Kyhälä with harmonicas playing the live fanfares, big group of students and professionals taking care of the opening social dance session and ITE artists of the year, Paula Huhtanen. ... See MoreSee Less

This error message is only visible to WordPress admins