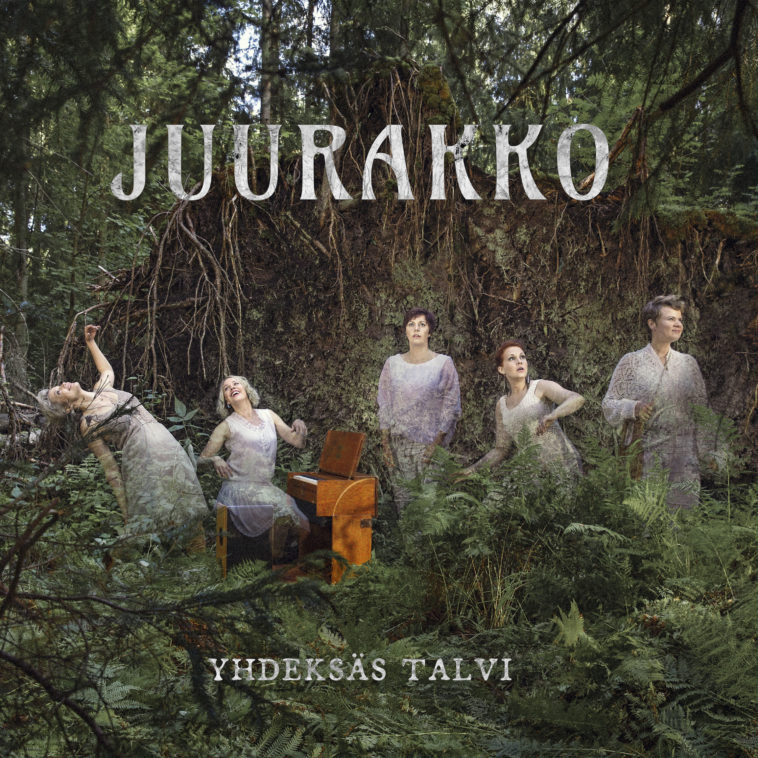 A record filled with sleet, slush and hygge

Juurakko’s third album, Yhdeksäs talvi – The Ninth Winter, is the best kind of medicine for the season of grey and cold. The record is built around the theme of winter, polar nights, mulled wine and the warmth of the fireplace, sleet, slush and twilight time. The album will be released to the media on November 4th 2019.

Juurakko enjoys to push the limits of the traditional ways to play their instruments, and The Ninth Winter is filled with gleeful improvisation. The vocal delivery is powerful, the kantele gets the chance to pull out all the stops, and everyday objects are used as unorthodox percussions alongside the bowed lyre, harmonium and guitars. The record contains a spectrum of dance rhythms from hambo to schottische and nuances from blues to Finnish contemporary folk music. The compositions are like snapshots of the polar night: the bleak and dull November, the longing for light and the spring breakup of ice. The record invites the listener to the best winter party — one where you drink, eat, play and sing.

“Winter seems to contain a lot of mysticism, stories, festivities and beliefs. We are impressed by the Finnish tales of midwinter, and fascinated by all the numerous words describing snow and ice in our language. The nine songs of this record include at least forty different forms of cold, snow and ice. Winter is filled with contradictions — everyone can’t take the darkness of the polar night, others love the peace and twilight of wintertime. With this record, we want to encourage people to enjoy this unique season. Between the lines we cannot help but wonder: Are winter stories a dying tradition, if there aren’t any cold periods in the future? One of the most important themes while making this record has been the concern about global warming. We want to contribute and raise awareness through our music.”

Juurakko’s music is influenced by Finnish and American folk music. The group loves rich storytelling and composes the songs and lyrics themselves. They have been acknowledged for creating their own style of music and for their radiant positive energy on stage. Juurakko has been described in the following manner:

“Juurakko well done! Your show was the most empowering, unifying and soul-stirring performance of the whole festival!” (audience feedback, Kihaus Folk 2016)

The first single Räntää, hyhmää – Sleet and Slush, from the upcoming album, was released on October 14th in collaboration with Greenpeace as a music video directed and written by internationally awarded Klaus Welp (https://youtu.be/lTathM1xqvo). The full record Yhdeksäs talvi – The Ninth Winter will be released on December 3rd, in collaboration with IMU-Inkoon musiikki at Bistro K, Musiikkiteatteri Kapsäkki, Helsinki. The record release tour (3–20/12/2019) will start from Helsinki and continue through Finland to Lapland. The intention is to carry out the tour with a minimal carbon footprint.

Article about Ánnámáret in Lappalainen newspaper.

Four part documentary about Kalevala dead or alive project. Fourth episode will be re-broadcasted tomorrow, Tuesday at 17.10 on @yleradio1 . You can listen the program also from Yle Areena: areena.yle.fi/audio/1-50547770

Four part documentary about Kalevala dead or alive project. Second episode will be re-broadcasted today at 17.10 on @yleradio1 . You can listen the program also from Yle Areena: areena.yle.fi/audio/1-50547770