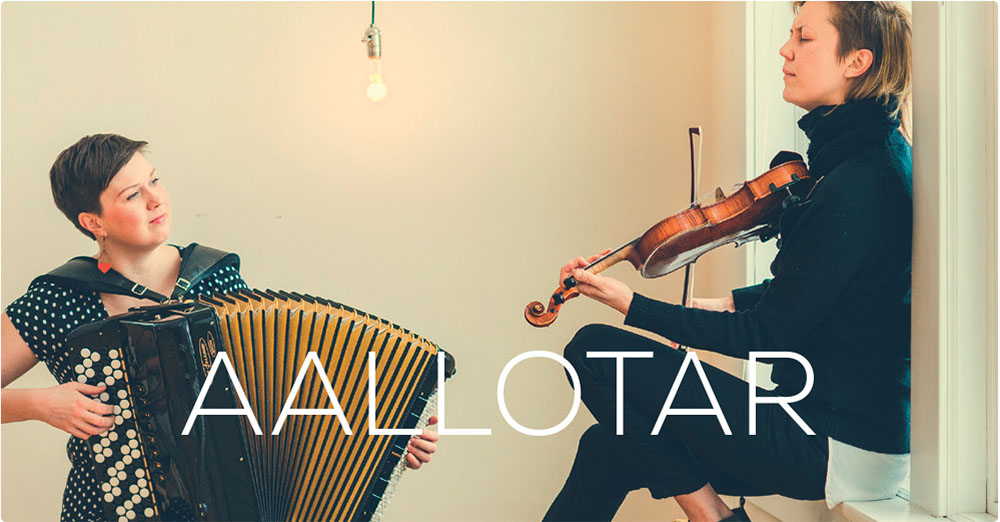 AALLOTAR (“exquisite, sophisticated chamber folk music”) is a transatlantic collaboration between Finnish-American violinist Sara Pajunen (Minneapolis, MN) and Finnish accordionist Teija Niku (Helsinki, Finland), whose families once lived within hours of each other in the western regions of Finland. Using instruments traditional to Finnish and Finnish-American folk music and singing in both English and Finnish, the music of Aallotar pays tribute to Pajunen and Niku’s respective cultures, which — although they pulsate with many of the same values and energy of 100 years ago — have grown apart. While Aallotar explores these differences, the music ultimately intends to create new harmonies that reflect the rejoining of sounds at once familiar and foreign.

Niku, from Haapavesi, Finland, has earned a master’s degree in folk music from the Sibelius Academy and won the respected Konsta Jylha competition with her band Grupa Balkan. Her album “Finsko Pajdusko” has been nominated Ethno Album of the Year in Finland’s version of the Grammys. Pajunen, one ‘of the most ambitious and notable practitioners of Finnish folk music outside of Finland,’ has received classical music degrees both in Minneapolis and Helsinki. She has founded two touring ensembles based on her Finnish roots: Kaivama and Tango Pohjan Tähden.

Aallotar released its debut CD, ”In Transit,” (And Say We Did) in March 2014. Since their formation in fall 2013, they have toured the United States four times, including shows at the Old Town School of Folk Music, HostFest, and as a showcase artist at Folk Alliance International.